One Moment in Time

Whitney Houston said, “Give me one moment in time when I’m more than I thought I could be … And in that one moment in time, I will feel eternity.” I wrote this story in January, 1993, just before I launched Sanctuary, my spiritual halfway house, which was its own leap of faith. In light of Oprah doing a firewalk, I'm sharing this article about my first firewalk.

A Leap of Faith


I circled the fire with a tambourine in my hand, striking the instrument on my thigh in time with the chant, "My body does whatever it takes to protect itself."  I gazed into the glowing red and orange eyes of the twelve foot by four foot bed of coals and watched a coating of white ash begin to form. "The fire and I are one," I chanted with the others.


The fire pit looked back, studying me with its many eyes.  "Will you walk tonight?" it silently asked. Would I cast aside caution and logic and make a tremendous leap of faith with a few small steps on an 1800 degree bed of coals?  Could I?


The chant changed to "I am the light, I am the love" and then swelled around  me again with "The fire and I are one." I thought about how I came to be standing on the edge of eternity, a 42-year old woman, questioning the very nature of reality.


It was only a couple of weeks ago as I entered the Chapel of Prayer with fifty or so people to listen to a Hindu Guru tell traditional Indian parables, that I met Charmaine McGhie and Tore Fossum. We were seated next to each other and connected so quickly that Charmaine invited me to a New Year's Eve Party and Firewalk.


I was intrigued. I had seen firewalking on TV and read about it in National Geographics, but never had I witnessed it in person.


Meanwhile, the couple gave me a book called "Firewalk" by Jonathon Seinfeld that I read with great interest. The book called firewalking an empowerment tool and a subcultural movement in the U.S. since the 1970s. It said the U.S. has more firewalkers than the rest of the world put together. I couldn't believe it!  How could I have missed it?


I had pretty much tried every "new age" experience I had run into. How could such a phenomenon have slipped by unnoticed? My excitement grew as the days passed.


The book helped keep me occupied with a lot to think about in the days leading up to the party. It told stories of firewalking in every culture and quoted scriptures about firewalking. It even discussed the unsatisfactory research that has been done. I was primed for the experience - to watch the experience, at least.


I arrived early at the suburban house in a nice Friendswood, Texas neighborhood. Not really where one would expect to see a firewalk. The preparations looked like any other New Year's Eve party. Guests arrived with covered dishes, and someone played piano—fifties hits for a sing along. The only difference is that no alcohol was present.


At about 9:00 pm everyone gathered in the back yard. A norther was moving through, and the air was cooling down. The grass was soaked with a hose as a safety precaution, and the evening began. The fire department showed up to certify the safety measures, and approved the walk.


Each participant took turns carrying logs to build the fire. They were instructed to think of the logs like children, and focus loving attention on them. A firewalking facilitator took the logs and built an impressive "boy scout" style teepee-shaped structure that would become a large hungry bonfire that would devour about half a cord of wood.


The excited attendees took turns stuffing newspaper in the cracks, and the fire was lit with great ceremony. The blaze reached skyward as a word of thanks and protection was intoned by a lady wearing a long full skirt. Surely that skirt was not a good thing in which to walk through fire.  I love fires. I faced the flames and raised a hand in salute. Just as I raised my arm, the fire leaped upward, and it looked exactly like I was waltzing with the vulcan fire god. My friend Juanita snapped a photo of it, and I love that photo. 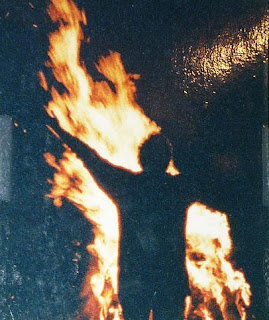 When the fire was blazing violet and gold, everyone went to the patio to try out some other phenomenal activities. It would be two to three hours before the coals were ready.


Someone announced it was time for the "rebar game" and a cheer rang out. I had no idea what that meant. Rebars are 3/4" x 6' steel bars used to reinforce concrete. Two people stand face to face about six feet apart and a rebar is suspended between them by placing the tip of the metal rod in the hollow of your throat.


The two people are told to focus their energy and see the rod bending. When they feel focused, walk toward each other. The rod could either pierce your throat, cut off your breathing, or it could bend. The rest of the watchers focused energy as well while Whitney Houston’s “One Moment in Time” played loudly. It was the first time I had heard that song. So perfect for that moment in time.


All of rebars bent. There were no tracheotomies that night. It was impossible to use force to bend the rod in this position without tremendous pain. I know because I found that out through experience. But when properly focused, the rod just sort of melts, and  suddenly I was catching my partner in my arms as we fell toward each other laughing. Yes, I did it! I couldn't believe it.


Next, we broke boards like so many karate experts. Only we weren't. One inch thick by twenty-four inches wide pine boards were suspended across two large bricks. When I focused, the board almost broke itself. I was rewarded with a tremendous energy rush. I had no idea I could do that. I had never tried before. So many things are like that, we don’t know we can do them because we’ve never tried before.


Finally, the coals were ready. The group returned to the back yard. The fire was so hot, it was difficult to stand close to it for more than a few minutes. The coals were raked out smooth, and the temperature was measured at 1800 degrees.  How could anyone hope to walk on this? It was preposterous. I was glad I'd only come to watch.


The entranced group circled the fire pit and chanted as they connected with the coals. No one seemed to want to be first. I wondered if anyone would find the courage. Suddenly Charmaine was at the top of the pit quietly chanting and focusing on the far end of the coals. 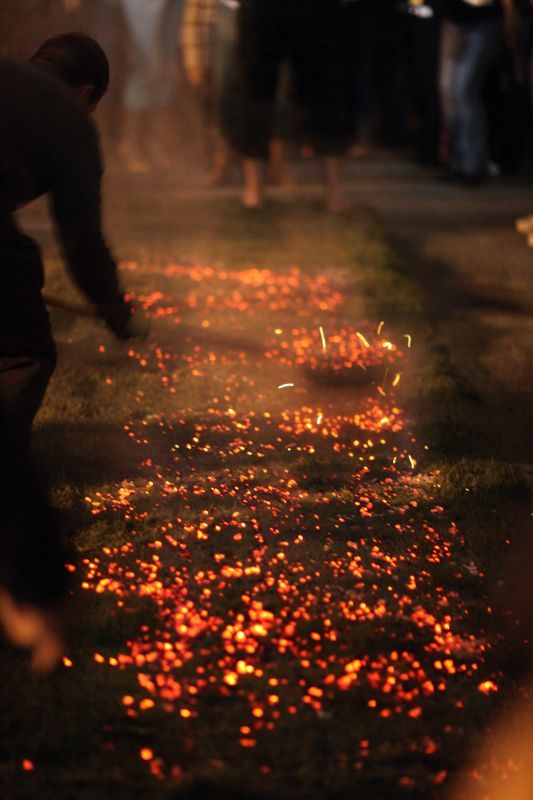 Then it happened. She stepped onto the coals and kept walking, slowly, not rushing, the full twelve feet. As she stepped off, a cheer went up, and she walked around the pit and repeated it. She was followed by Tore and another, and another. A line of people followed with no injuries. The lady in the long, gossamer skirt walked eight times, and the fabric did not catch fire. Everyone had walked, except me and one other person. "Oh well," I thought, "I only came to watch anyway."

Some people walked slowly, some people ran, some people danced. One person cartwheeled through the coals and then did the most amazing thing. He stepped onto the coals and stood there in one place, reached down and lifted up a handful of coals and threw them into the air. Then he quietly walked off the fire pit - unharmed.


This went on for a couple of hours. It was like a dream. My mind had no place to file this scene. Could I do it too? Did I have enough faith and concentration and courage? I didn't know. I did not feel afraid. But I also did not feel compelled to walk. Even so, I had removed my shoes and socks. Was that significant?


Then a voice was calling out  "Last call. It's time to go in and dance." Charmaine stepped up to the pit again, and this time I stepped out beside her and took her hand. We looked briefly at each other. Charmaine squeezed my hand and smiled, and we began to walk. We moved together, not too fast, casually. It felt as if we were in a cool tunnel. None of the radiant heat I had felt as I stood beside the fire pit reached me.


The coals crunched under my feet, and I was about to step off the pit, already at the other end. I did it! I had actually walked on 1800 degree coals, and my feet were intact—not even a blister. At that moment, as I thought about my feet, for an instant I felt the heat and almost panicked. The people at the end of the pit took my hands and said, "Your feet are fine." I repeated it over and over. And they were fine, not even a little bit red from the heat.


Now everyone was cheering for me! I knew I was about to begin rethinking reality. There was no other choice. It was that one moment in time.


Listen to One Moment in Time by Whitney Houston with lyrics on YouTube.

I love this story, Sandy. It's now been posted to My Embellished Life and I'm just promoting it through my networks.